IN 2016 the Dutch company restoration company, BAIV, discovered two International M5 Half-tracks, battle-weary survivors of the Second World War; the first in The Netherlands, the second in France, reports Carry Harts. BAIV opted to rescue both veteran vehicles and the company is currently restoring them so they can parade at the forthcoming Liberation of Europe commemorations, starting in Normandy with the 75th anniversary of D-Day in 2019.

Close examination and historical research proved that both vehicles operated with the British Army during the Second World War. After the war, one served for many years in the French Army and in 1959 was bought by the famous Dutch surplus dealer, A.J. Barth (Blaaksedijk) from a British Army depot in Belgium. It was used by a Dutch farmer in the province of Friesland, for which it was fitted with a crane. He used the half-track as crane support vehicle for decades.

The vehicle ended its active life next to a farm in Offingawier (also in Friesland). The new owner planned to restore the M5 himself, but before he could start work he passed away. The family decided to sell the vehicle and it eventually ended up with BAIV. The second M5 was traced by the owners of BAIV in 2016 in La Sône in France, at the surplus yard of Monsieur Lascoumes. Though almost completely hidden under a mass of weeds and undergrowth, the hull of the half-track proved to be sound and BAIV bought the vehicle and transported this unique Second World War survivor to Maarheeze in the Netherlands for a Class A restoration. 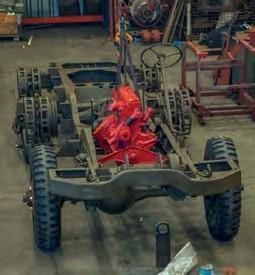 The new engine fitted to one of the half-tracks.

After the two vehicles were dismantled and their chassis’ sandblasted, the restoration of the vehicles began this year at BAIV’s workshop in Maarheeze. One of the M5s has already been fitted with a fully restored engine and was tested successfully. The upcoming year will see both vehicles fully restored, ready for their new crews to practice driving and maintaining the vehicles ahead of the 2019 commemorations.

For Britain at War readers who might be interested in investing in the restorations of either of these vehicles, BAIV offers potential new owners a unique opportunity to be part of the process. All clients of the Dutch company receive periodic updates on social media platforms such as Facebook or WhatsApp. In this way, the new owners experience the restoration of their vehicle as if it were being completed in their own garage. When the vehicle is finally ready, and rolls out for the first time, customers are invited to attend the unique moment. 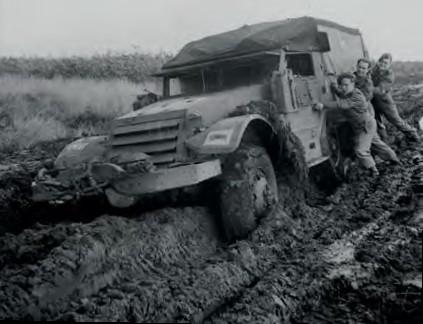 A M5 stuck in thick mud.

The International M5 Halftracks will be ready to roll in 2018, giving their new crews ample time to fully prepare for participation in the commemoration season in 2019. Starting in Normandy, events will also take the vehicles to mark the Liberation of Paris, as well as Brussels and Antwerp. Commemorations marking Operation Market Garden in The Netherlands will also feature, followed by the ‘Final Push’ commemoration which will end with a parade in Berlin in August 2020.