HMS Belfast passes beneath Tower Bridge to take up her permanent mooring. [ALL IMAGES COURTESY OF IMPERIAL WAR MUSEUMS]

TODAY, HMS Belfast, an instantly recognisable part of London’s riverside, sits at her permanent berth near Tower Bridge. However, eight decades ago Belfast represented the best of the Royal Navy’s strength of light cruisers. Launched on St Patrick’s Day, 17 March 1938, Belfast would go on to serve for a quarter of a century and became one of Britain’s most celebrated warships.

Ahead of her 80th anniversary, Senior Curator, Second World War, at IWM, Ian Kikuchi, said: “HMS Belfast is a rare survivor, a veteran warship and a unique witness to 20th Century conflict”, and events marking this have taken place with more scheduled for the coming year. Visitors were able to participate in the ‘Ship Shape’ programme, where Belfast’s conservation team showed how they keep the ship in good condition, inviting those on board to get involved in preparations to ready the cruiser for her celebration year. Those who participated and who attended events on her anniversary weekend in March, would no doubt have joined countless visitors since 1971 in learning about the history of this significant warship.

Belfast’s war began almost immediately following her commissioning on 5 August 1939. She formed part of the force, including HMS Hood and the carrier Ark Royal, that rescued the stricken submarine HMS Spearfish on 25 September 1939. While attacked, Belfast suffered no damage despite the efforts of the Ju 88s of KG.30, whose successes that day were limited to minor damage on Hood. In this period, Belfast also captured three merchant vessels before striking a mine off the Firth of Forth on 10 November, killing one.

After three years of repairs, Belfast returned to serve on the perilous Arctic Convoys. In the height of winter, huge waves could tear roofs from turrets, bare skin froze to metal, and dawn and dusk were just hours apart. It was whilst on these duties Belfast played her part in the destruction of the battleship Scharnhorst, at North Cape, on 26 December 1943. The cruiser was also detached to escort carrier attacks against German shipping in Norway, Operation ‘Leander’ in October 1943, and Operation ‘Tungsten’ in April 1944.

On D-Day, Belfast’s 6in guns added to the crescendo of naval gunfire supporting the landings on Gold and Juno. She remained on station until 8 July, when her final salvoes in anger in European waters, and her 1,996th main battery shell in support of Allied forces in Normandy, were fired during Operation ‘Charnwood’. Destined for the Far East, refitted with heavier anti-aircraft armament to better deter Kamikazes, Belfast arrived too late to have much involvement in theatre, but, assisted in the liberation of Japanese internment camps and repatriation of British civilians and POWs. Between April and July 1949, she served as headquarters ship during the Amethyst Incident.

The cruiser as seen today. 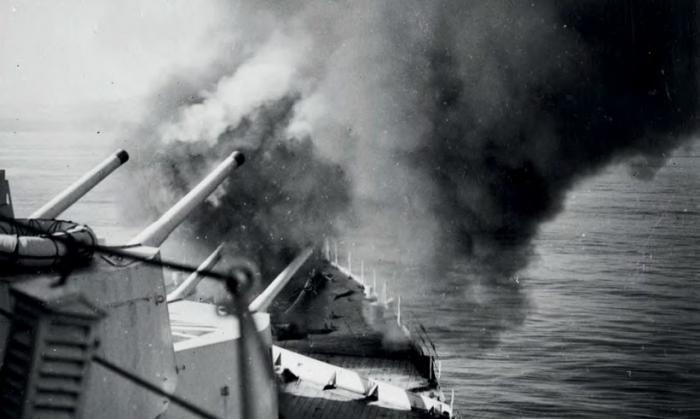 Belfast fires a salvo of six inch shells at targets on the west coast of the Korean peninsula.

The Korean War saw Belfast operate for 404 days of active service in theatre, during which she sailed 80,000 miles and fired 8,000 6in shells. In 1950 she supported operations in the Han River and bombarded Yongdok and later covered operations to recover a crashed MiG-15 in September 1951. She was hit in a duel with batteries at Wolsa-ri, killing one of her crew, on 29 July 1952,

Belfast received major modernisation between 1956 and 1959 in which her distinctive enclosed two-tier bridge and lattice masts were fitted, her 4in guns modernised, AA suite standardised, and NBC protection installed. However, the cost of operating and manning ships like her meant she was inherently expensive and would be decommissioned three years later.

Her fate undecided, there was an exhaustive battle to save Belfast. This culminated with the cruiser being handed to the HMS Belfast Trust in 1971 and she was towed to her mooring at Tower Bridge. On 21 October 1971, Trafalgar Day, Belfast, the first British warship to be preserved since Nelson’s Victory, opened to the public. She was transferred to the Imperial War Museum for a nominal £1 in 1978.

With the ship’s nine decks open daily, Belfast provides a fascinating insight into life aboard a Royal Navy warship across a critical period of conflict and change that forever shaped Britain’s senior service. The ribbon that held the champagne used to launch her, her preserved gun turrets, and the very pound used to secure her, are just some of the exhibits on board.

With a programme of events planned across her 80th year, prospective visitors are encouraged to keep checking the Imperial War Museums’ website for more information as it is released. 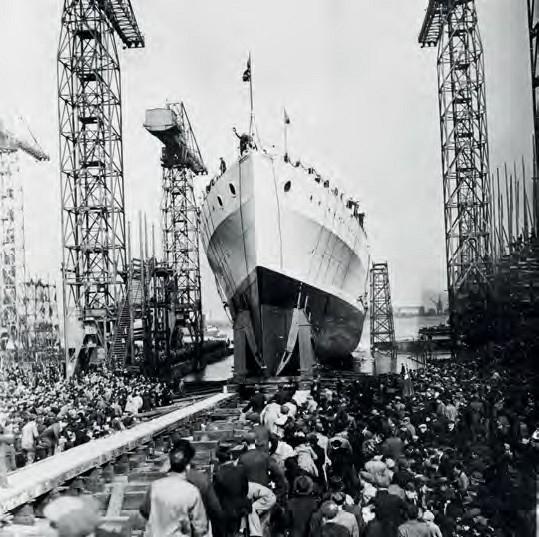 HMS Belfast at her launching ceremony. 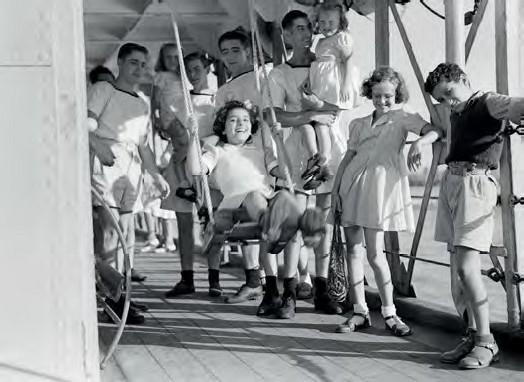 British children, liberated from camps in Shanghai, are entertained on Belfast.

Motto: Pro Tanto Quid Retribuamus (For so much, how shall we repay?)