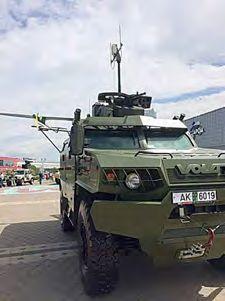 Belorussia’s Minsk Wheeled Tractor Plant (MZKT, also known as Volat) has revealed new variants of its new 4x4 light armoured vehicle at the MILEX 2017 defence exhibition held in Minsk in May. First displayed at the Eurosatory exhibition in June 2016, a prototype baseline vehicle passed preliminary state testing in April 2017, with further variants scheduled for testing later this year, all based on a common chassis. Known as the MZKT-490100-010, or alternatively the Volat V1, the baseline vehicle is operated by a crew of two and carries eight passengers in the rear. One crew and one passenger door are located on either side of the vehicle, with a rear door for passenger exit; this rear door can be exchanged for an electrically-powered ramp.

Emergency services were called to the Townsville Field Training Area, Queensland, Australia recently when two defence personnel had head injuries. It is understood two 22-year-old men were travelling in the armoured vehicle when it hit a large rock and they sustained their injuries. A statement was later released confirming that a single vehicle accident involving an Australian Army M113 Armoured Personnel Carrier had occurred. The statement read “it is believed the vehicle struck a concealed rock during a routine and scheduled training exercise at the Townsville Field Training Area”.

The Singapore Army took the opportunity of its Army Open House event held in May to unveil a prototype tracked armoured recovery vehicle. Known as the Next Generation ARV it is destined to be the next addition to the family of tracked combat vehicles under development by the Defence Science and Technology Agency and Singapore Technologies Kinetics. The 29-tonne, 6.9m long prototype is specifically designed to provide repair and recovery support to the Next Generation Armoured Fighting Vehicle announced by their Ministry of Defence in July 2016.