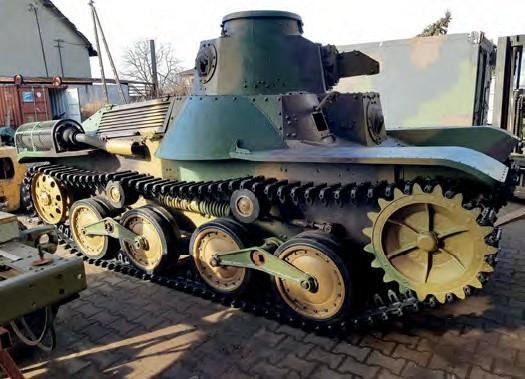 A RARE Japanese Type 95 tank will debut at Tankfest this year, according to Bovington’s Tank Museum in late January.

The Type 95 Ha-Gò was Imperial Japan’s mainstay tank of the Second World War, and – with more than 2,300 produced – it remains by far the most numerous tank ever used by the Japanese Army.

One of only two running examples of the Type 95 worldwide was brought to the UK from Osaka by Oliver Barnham in 2005. He has spent more than a decade restoring the vehicle to running condition, retaining original parts and features, including the engine.

Among the best light tanks available at the time of its introduction in 1935, the Type 95 was proven in Manchuria. There, it deployed in infantry support and reconnaissance roles, also facing the small and motley assembly of several different armoured vehicles fielded by the Chinese National Army. It also served well against the BT-series of tanks employed at Khalkhin Gol by the Soviets in 1939.

However the pace of development quickly overtook the Type 95 and its closest equivalent, the American M3 Stuart, was newer and of superior design. Yet, in practice, the close combat ranges and tough terrain of the Philippines enabled the Ha-Gò to remain competitive against the M3 in 1942.

The Type 95 soon met its match when it faced British armour, Australian-crewed Matilda II tanks were almost impervious to the Ha-Gò’s 37mm gun while 2-Pdr shells and even heavy machine gun fire could penetrate the Type 95 with relative ease. The Ha-Gò was also hopelessly outclassed by the M4A2 Sherman, which was fielded in large numbers by the US Marine Corps.

The Tank Museum’s head of collections, Chris van Schaardenburg, said: “It’s fantastic to have the Ha-Gò at Tankfest 2019. I know that the majority of our visitors will never have seen one running before and we are very grateful to Oliver Barnham for allowing us to display this rare Japanese tank.” Tankfest 2019 runs from 28-30 June and is a ticket-only event.