’Resistance’ Cache Uncovered in the Netherlands

A collection of wartime weapons has been found during construction work in the Netherlands. An excavator inadvertently exhumed the cache when the machine pulled open a large metal box containing the small arms. A second, similar, container was also recovered.

The store was discovered on the edge of a forest, behind a garden centre and highway, just outside Malden, Nijmegen, at a location that was a farm during wartime. It is thought to have been buried by SOE or OSS operatives or by members of the Dutch Resistance. 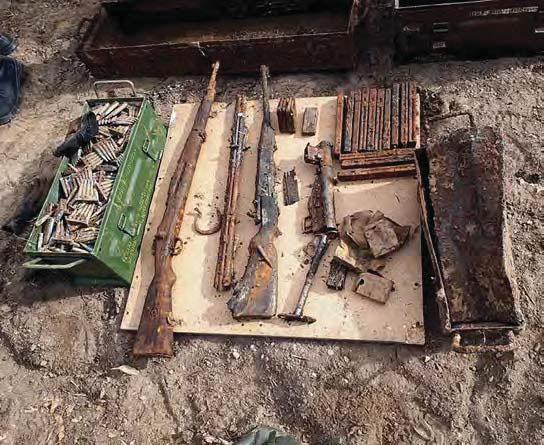 The unusual time capsule contained a British Mk.III Sten submachine gun and a German-issue Kar 98k rifle, with around 1,000 rounds of ammunition loaded into 13 Sten magazines and dozens of Mauser stripper clips. Also recovered were the remains of two American-built weapons; a double-barrel rifle or shotgun, and what was possibly a M1 Carbine with a handful of filled magazines. The Sten and K98k are said to have been in a good, albeit heavily rusted, condition.