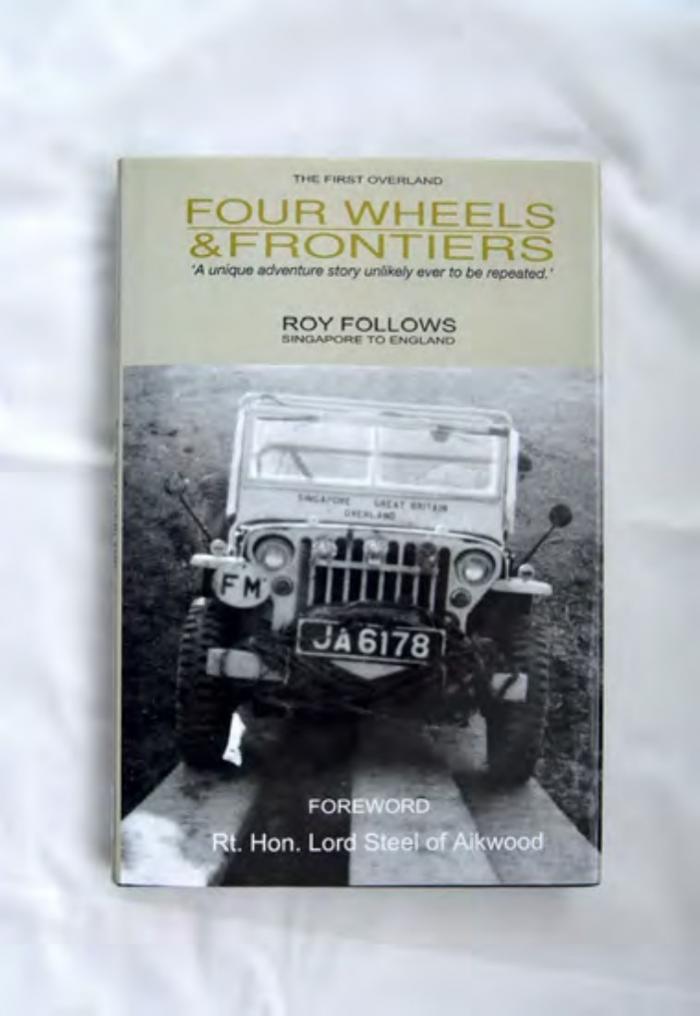 In the years after World War Two and through the 1950s, a number of people made huge journeys in war-surplus vehicles and wrote books about them; a well-known example is Half Safe by Ben Carlin which details his travels in a Ford GPA. The journey from Singapore to England was made in this era by this book’s author Roy Follows, and his friend Noel Dudgeon, but the story wasn’t published until 2005.

Follows and Dudgeon were colonial police officers stationed in Malaya whose time was almost up when they were discussing how to return to England. ‘Fellows quipped, ”What about overland?’’ while chewing on a wad of salted fish, running the spoon around my mess tin, chasing the last few grains of rice. The minute Noel looked up, I knew he was hooked on the idea of driving home.’ Reportedly, this chance remark made in a jungle den, deep in the heart of Malaya, was the catalyst to a unique overland adventure. 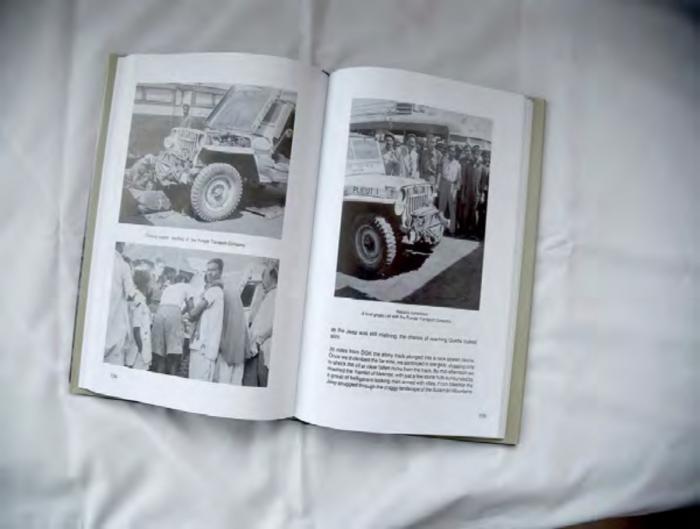 By February 1958, they’d bought an ex-army Willys MB Jeep from a scrapyard and were meandering 13,000 miles towards England. Undeterred by the disclaimer, ’Enter Burma at own risk’ endorsed in their passports, the fearless duo take on the challenge of the infamous Ledo Road. While over in Baluchistan, they resolve a life-threatening ambush with the outward calm of nipping to the corner shop for a pint of milk. Fluent in Cantonese, Noel Dudgeon, was the distinct other half of this venture. During his service in the Malay police, Dudgeon commanded a unit of surrendered Chinese terrorists known as the Special Operation Volunteer Force, and undertook covert operations against the communist guerrillas. He later served in Vietnam with the Australian Army and American Special Forces and finished his career as a major in the Australian SAS. 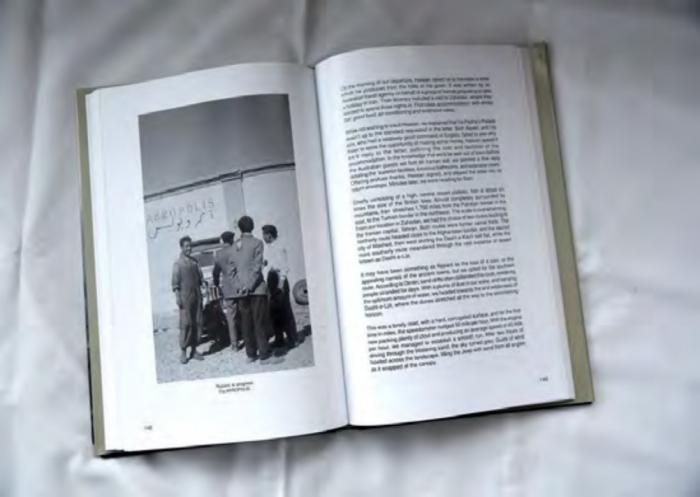 For those who like old Jeeps or overland travel stories this is definitely one to have on the shelf. Its plentiful selection of more than 70 black and white photographs complements the narrative and is, in turn, complemented by maps and diagrams of routes probably not currently drivable because of the political situations in numerous countries. The only negative comment is that, in a book quite clearly about an MB, I can’t help but wonder why the spec sheet describes the Jeep as a CJ-3B. Don’t let that detail stop you buying it though. 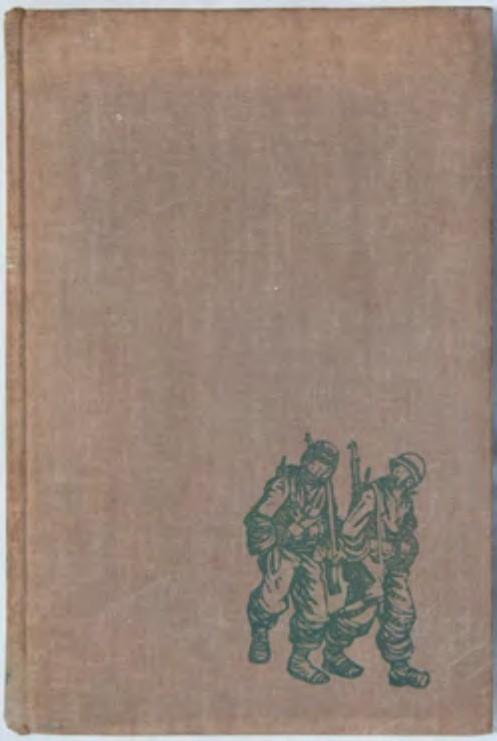 One of the famous cartoons of World War Two shows a tough old cavalry sergeant shooting his battle- damaged Jeep. This frequently reproduced cartoon that reflects the affection soldiers had for their Jeeps is one of many such insightful cartoons that accompany the text which offers an unofficial, but no less valid, history of the US Army in combat in Europe. It is reputed to offer “the truest glimpse most Americans got of the real war.” 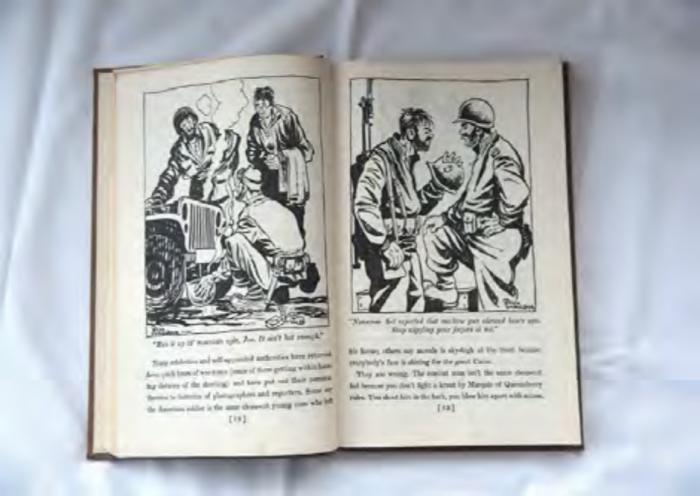 Shaving with the 45th Division in Italy

Mauldin’s distinctive style of illustration relied on heavy black lines and came to prominence in the pages of Stars and Stripes magazine. The, then, 22-year-old infantry sergeant defied US Army censors, German artillery and Patton’s pledge to ‘throw his ass in jail’ to deliver the popular weekly cartoon, Up Front, to the magazine. Up Front’s heroes were the battle-weary, wise-cracking and cynical Dog Faces, Willie and Joe, whose stooped shoulders, mud-soaked uniforms, army slang and city dialects bore witness to the combat and the men who lived and died in it.

The Italian campaign followed the cessation of fighting in north Africa and started with amphibious landings on Sicily soon followed by further landings at Salerno and Anzio culminating with a long and bitter drag into the mountains. Bill Mauldin, was there with the US 45th Infantry Division and noted in Up Front that even Jeeps have limits. He says: “When the mountain fighting in Italy first started to get tough, and it was impossible for trucks or Jeeps to bring food, water, and ammo up the mountain trails, mule companies were mustered and calls for experienced mule skinners went out through the divisions. Mules were sought out and bought from farmers. They carried supplies to many soldiers who hadn’t seen a Jeep for weeks.” 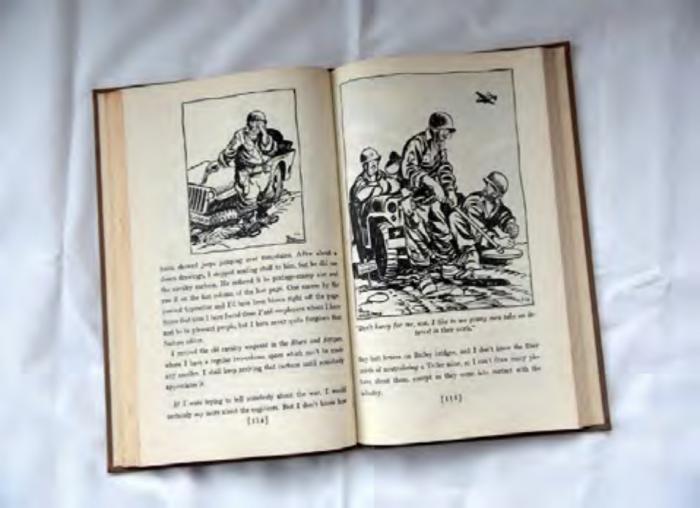 I often think that the humanity of Up Front is a far more eloquent tribute to the combat soldiers, especially those killed in action, of the US Army, than many of the official or more textbook-like books about the war in Europe. Others agree, Mauldin (1921-2003) won the Pullitzer Prize in 1945 for his body of wartime work. There’s numerous editions and reprints of this book so while the 1945 edition without the missing dust jacket is shown here, there are versions still readily available including a 2000 edition published by WW Norton and Co.