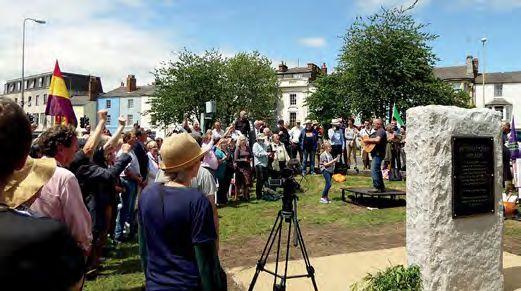 A MEMORIAL has been unveiled in Oxford to the men and women of Oxfordshire who fought in the Spanish Civil War, writes Lauren Cantillon. The conflict, between July 1936 and April 1939, was a struggle between Republican and Nationalist factions. Ultimately, the war was won by the Nationalists, with General Franciso Franco ruling Spain for 36 years, until his death in November 1975.

People travelled from across the world to make a stand against the Nationalists, with 31 joining up from the Oxford area - six of whom died during that war. The names of the six are engraved on the monument unveiled at Oxford’s South Park on 10 June. It bears a clenched fist, the international symbol of hope and defiance, crushing a scorpion representing the ‘poison of fascism’.

The project was funded through local events and the sale of a book, ‘No Other Way: Oxfordshire and the Spanish Civil War 1936-39’, written by three local historians.

Colin Carritt, chair of the Oxford International Brigade Memorial Committee, lost his uncle, Anthony Carritt, in the conflict, but Colin’s father, Noel, also fought and survived to return home to Oxford. Colin has been campaigning for the tribute since 2014, saying: “We are delighted to have achieved this long-held ambition. For a city of its size, Oxford sent more volunteers than most. They were students, graduates and academics, car factory workers from Cowley, and farm workers from the rural hinterland. As the plaque says, ‘they went because their open eyes could see no other way.’ These volunteers of 80 years ago could see the march of fascism spreading across Europe and knew it had to be stopped.”

The story of how Noel and Anthony came to be in Spain during the civil war is remarkable. Born into a well-to-do Oxford academic family, their father was Professor of Philosophy at University College. The family consisted of five brothers and two sisters, with four of the brothers plus their mother joining the Communist Party during the 1930s; the entire family was, to a greater or lesser extent, caught up in the radical politics of the time.

In 1933, Noel married a German Jewish refugee, Liesel Mottek (a member of the German Communist Party) and the couple moved to Sheffield where Noel took up a teaching post. In the autumn of 1936, shortly before his 26th birthday, Noel followed Liesel to Spain and joined the International Brigade at their Paris recruiting office, only writing to his parents informing them of his decision in Victoria Station whilst waiting for the train to Dover.

Noel fought in the British Battalion at the Jarama River in February 1937, facing 40,000 Francoist supporters, and received a wound from a ricocheted sniper bullet which embedded itself in his hand. Although the wound wasn’t serious, he was no longer able to fire a gun and was sent back behind the lines for treatment. He was lucky – by 14 February, of the 500 British fighters at Jarama, only 160 remained.

During convalescence, Noel met up with Anthony, who also travelled out to Spain with the International Brigade in the Spring of 1937. Colin describes his uncle as arguably the least political of the brothers – he had wanted to go into farming from an early age – and believes that Anthony went to Spain due to the brothers being close, rather than for pure political solidarity.

That Spring, Franco’s forces pounded the northern Basque region of Spain, supported with manpower and weapons from Hitler and Mussolini. It was believed that a major offensive at Brunete, west of Madrid, would draw Franco’s troops away from the northern Basque region and provide relief for the troops there. Yet Brunete proved a physical challenge for the British Brigade, with temperatures over 100 degrees fahrenheit for more than 12 hours each day, and the only cover from strafing aircraft being scant willow trees alongside dried up river beds.

Noel (now driving ambulances), and Anthony, were sent to the region with Noel driving the wounded back to the relative safety of El Escorial, some 12 miles from the front line. The route was hazardous, often coming under heavy bombing attacks. After a particularly difficult journey back to El Escorial, during which a bomb rendered his ambulance undrivable, Noel discovered that Anthony was missing. Despite searching all hospitals and field stations, it became apparent that Anthony was dead.

The strain of having two sons fighting in Spain has taken its toll on their mother, and the sudden death of Anthony made matters worse. In the Autumn of 1937, Noel applied for leave and returned home to England. Due to his Security Services record, Noel was refused entry to the Navy on the outbreak of the Second World War, and instead he aided the war effort in an aircraft factory. He eventually returned to teaching after the war, becoming head of Biology at Dr Challenor’s Grammar School, Amersham, remaining there until retirement in 1972. He died twenty years later.

Colin sees his father and uncle as anti-fascists, rather than Communists, as many joined the Communist Party in the 1930s as a means of acceptance into the International Brigade. Humanitarian aid workers, doctors, nurses, pacifist volunteers and Quakers also played significant roles in the fight against Franco.

Colin hopes the memorial will heighten awareness of the Spanish Civil War, saying:

“Spain was simply the first step in a long fight for freedom and democracy that ended in 1945. But intolerance and bigotry are ever-present. [We hope that] the Oxford memorial becomes a rallying point for all fair-minded people in the city to come together to support progressive causes.”