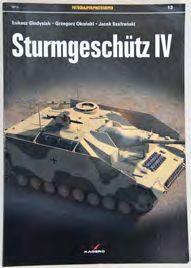 German armour of World War Two never fails to interest, especially the Panzer IV and its variants. The Sturmgeschütz IV (StuG IV) (Sd.Kfz. 167), was the German assault gun variant of the Panzer IV. It was used in the latter part of the war when the Stug was used in a tank destroyer role in German formations and tactical planning in order to prop up the capabilities of the dwindling tank force available to the German Army on both fronts.

This book contains a chapter on the history and development of the StuG IV. There are archive images and technical information. Interestingly the book includes a colour photograph section showing the 2006 recovery of a Stug IV from Poland’s River Rgilewka. Colour walk-around photos and colour illustrations of camouflage schemes and markings complete this guide for modellers and enthusiasts. Photography of the crew’s uniforms will also appeal to re-enactors.

Verdict: The colour images of the restoration of the Stug recovered from the Polish river gives a good indication of the size of the task involved in a restoration project such as one of these metal monsters.