MORE THAN three decades after they were stolen from an army barracks room, medals awarded to a Scots Guardsman, including his MiD emblem, have been returned by the world leading specialist auctioneers, Dix Noonan Webb Ltd.

Fife-born Lance Sergeant Ian Davidson, now 61, was Mentioned in Despatches for his gallantry during the Battle of Mount Tumbledown, in which the Scots Guards suffered eight killed and 43 wounded as they drove the Argentines from Tumbledown, one of the highest points overlooking the capital, Port Stanley. Fought in the closing days of the conflict, the important action helped secure British victory and the surrender of Argentine forces on 14 June 1982.

In this battle, Ian Davidson was Mentioned in Despatches, when on the night of 13/14 June 1982 he risked his life to steady his pinned down unit, moving between positions at extreme risk, to encourage and reassure his fellow Guardsmen. The original recommendation for his award reads:

Davidson’s medals, a General Service Medal with clasp for Northern Ireland and the South Atlantic Medal with the oak leaf emblem denoting a Mention in Despatches, were stolen in 1983, and although he was given a replacement set, he never felt the same attachment to them.

The return of the items was negotiated by the auctioneer after a collector (who acquired the medals in good faith) brought the set in for auction. They were spotted by David Archibald, who served with Davidson. Once the theft had been verified, both Dix Noonan Webb and the collector agreed that they should be returned, the collector forgoing the £2,600 they were expected to reach under the hammer.

Mr Davidson stated: “My heart skipped a few beats when I heard that the medals were to be returned to me. It is very difficult to put into words what this means to me, as I have always felt undressed wearing replacement medals at functions I attend. I can now wear the originals on my very proud chest. Words are not enough to explain how happy and grateful I am at what Dix Noonan Webb and the collector have done to ensure their safe return after some 30-odd years. I owe a huge debt of gratitude.” 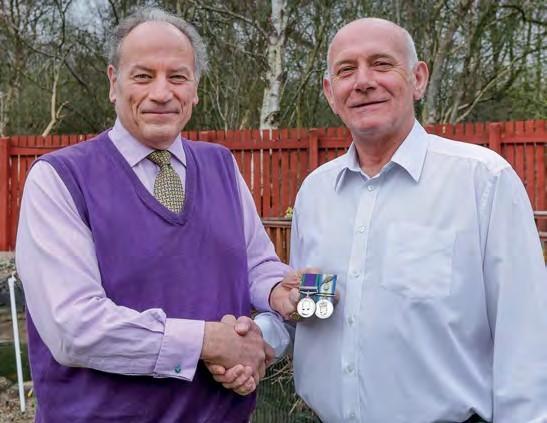