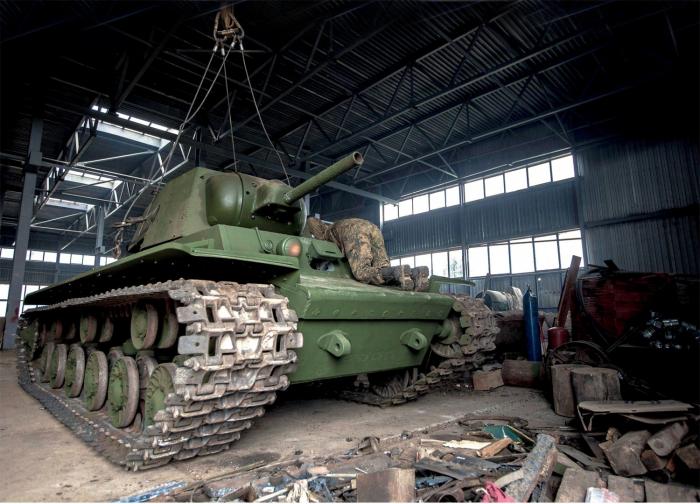 Prior to this KV1 tank being found, there were no KV1 Soviet tanks on Belarusian territory, and fewer than 15 remain anywhere in the world

If you’ve been a visitor to any of the UK’s military museums over the past few years, you’ve probably noticed that they have become busier, and that the average age of the visitors is dropping. Not just that, but that small boys are turning to their dads and reeling off technical rhyme and verse. Those, who in days gone by would perhaps have been the Hornby train-set buff, collector and track builder, are now, in the digital age, creating and exploring virtual worlds but with equal knowledge, enthusiasm and attention to detail.

Games like World of Tanks, World of Warplanes and World of Warships, serve to feed the imagination and to educate the mind. So much research goes into the constructs of these war games that they really do bring history to life for a younger generation. The top brass of Wargaming.net are not all IT specialists; the company employs many historians, military experts and educationalists to ensure that details within game environment are as accurate as can be achieved, without compromising the ‘playability’ of the game.

These people are genuinely interested in conserving both the hardware and the stories for the future too. Tracy Spaight, director of special projects at Wargaming.net says: “We are passionate about history and committed to an exacting recreation of each of our tanks.” They’ve even gone so far as to record actual engine noise from real tanks, going uphill, traversing gravel or on the road, so that the tanks featured in the game sound exactly as the real deal does in each situation; and this is for each of the tank types; it isn’t just one generic engine noise. 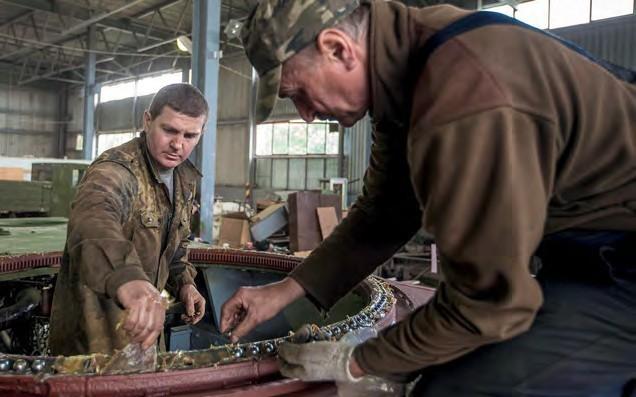 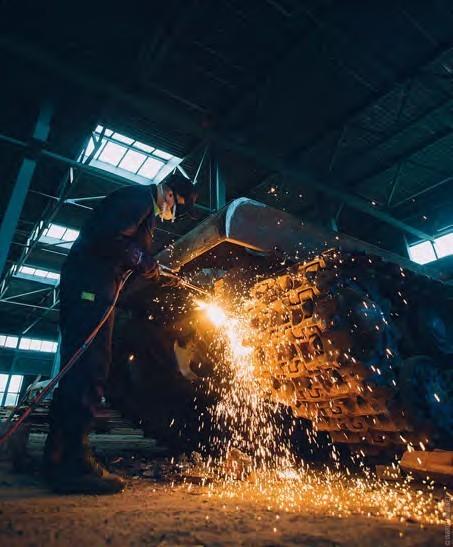 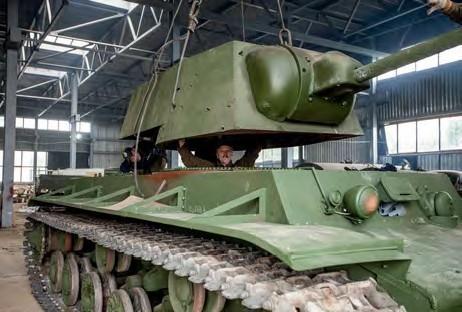 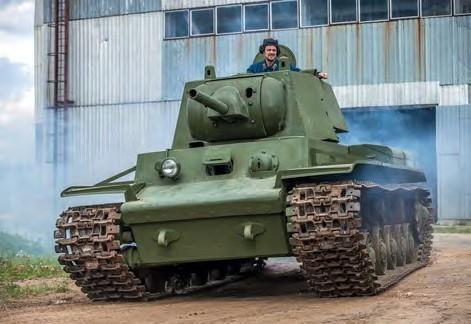 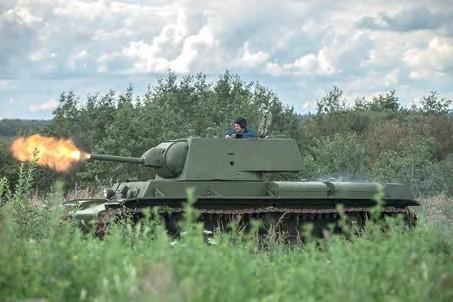 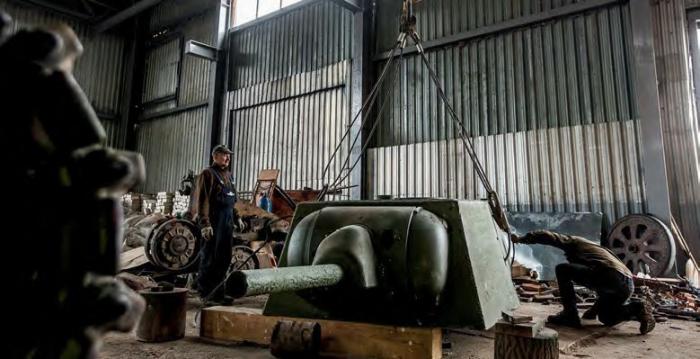 Having access to the hardware is imperative to the success of the games. Historical accuracy is critical to the players who are mostly highly knowledgeable and come to these games because of their interest in the subject matter.

Feedback gleaned from their players tells Wargaming.net designers that it is a turn-off for example, if the specifications are inaccurate or for the scale of the vehicles to be wrong. New and expensive technology, like 3D scanning, enables the designers to get it right, but only if the hardware is available to be scanned. The realisation that this hitech company needed access to historical artefacts, led them to seek partnerships with their custodians. In doing so, they have made anincalculable contribution to the preservation of the archives and to keeping history alive.

Alex Babko, head of global special projects sums it up by saying: “We do well by doing good,” and then makes reference to corporate social responsibility.

Wargaming.net has invested a “not insignificant figure” in conservation work, recovery of historically important vehicles, sponsorship, docu mentaries and exhibition design. This includes 360 degree filming and applications aimed at getting visitors access to areas previously denied them for practical reasons, but which, through technology, can become accessible. Of course, all this benefits Wargaming.net by showcasing their technological excellence, as well as gaining them brand exposure.

It is their commercial strategy to associate their brand with institutions that the public admires and trusts and to highlight their games to the audiences most likely to be interested in playing them.

Crucially though, it truly is a symbiotic relationship as the varied worldwide institutions they are partnering are also benefiting enormously. These include the Imperial War Museum, the Pacific Battleship Centre, the National Museum of Romanian History, the Australian Armour and Artillery Museum in Cairns, the National Museum of the Royal Navy and the Royal Air Force Museum.

Richard Smith, director of Bovington Tank Museum says: “Our partnership with Wargaming has introduced a new generation of armoured warfare enthusiasts to the importance of heritage. We’ve seen growth in both our social media channels and our visitor numbers from World of Tanks players who are keen to learn more about historical tank men and to see the genuine artefacts.

“In particular we have seen the impact this has had on events like Tankfest, which now attracts younger visitors from across the globe and sells out every year as a direct result of our association with Wargaming.” World of Tanks sponsor Bovington’s Education Centre, as well as their annual Tankfest event. 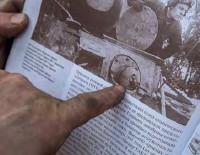 This KV1 was a very rare discovery, equipped as it was with one of only 141 L11 guns ever fitted to these tanks 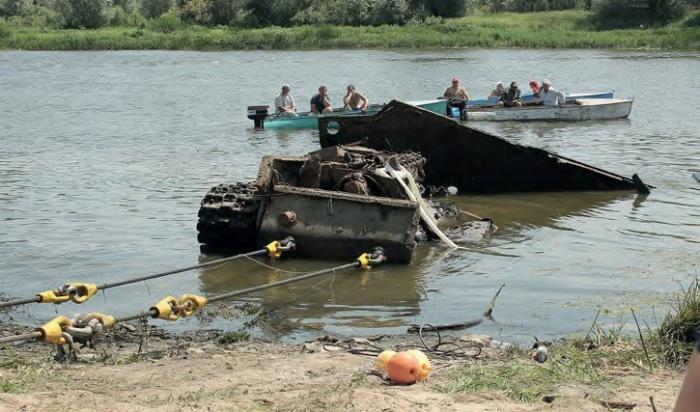 KV1 hauled from the River Don in Russia, 2014. It was deemed beyond repair

Museums are undergoing a renaissance; it’s not so much that dusty displays are gone, but that they are being brought to life in the 21st century with the addition of technology and the encouragement of interactivity. Today, virtual reality (VR) and augmented reality (AR) supplement the visitor experience. In VR, one sees a completely new world or environment whereby the headset transports the wearer ‘elsewhere’, but in AR, the onlooker is presented with an overlay of some sort, usually in the form of an app on a mobile device into their actual, and still visible, physical environment.

Not all of the initiatives Wargaming.net has been involved in are hi-tech and futuristic, but many are. Here is a summary of just a few of the varied projects they’ve been involved in over recent years.

In 2013 a salvage operation saw a German Dornier 17 bomber eventually lifted from Goodwin Sands, three miles out in the English Channel. Wargaming.net gave £75,000 to the Royal Airforce Museum at Cosford to fund the ‘Interpretation Zone’ where the recovered plane now resides. A number of displays, in different mediums tell the story of the Dornier, its recovery and conservation. 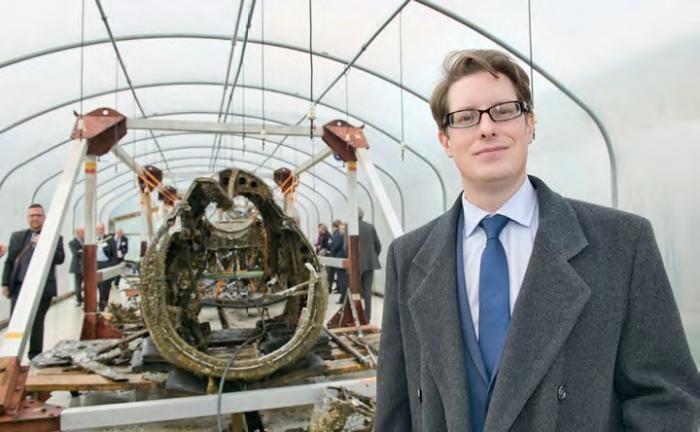 Recently The Tank Museum, Google and Wargaming.net worked together to create the first virtual reality military museum exhibition and at the time, the largest ever VR event.

More than 10,000 foldable cardboard headsets designed for use with smartphones, were distributed over the course of Tankfest 2015, and were also shared with 50 members of parliament in a special parliamentary session showcasing the ‘Best of British’ future technology. The app developed by Wargaming.net for use with the headsets creates an immersive experience of five different tanks in motion, including Tiger131 and an M4 Sherman, and gives an intimate view inside the vehicles, an area normally ‘off-limits’ to visitors.

In 2014, a KV1 was hauled from the River Don in Russia, but it was in a poor condition so no work was done to restore it. Its remains can be found at the Kublinka Tank Museum near Moscow. You can see the video of it being raised from the depths on https://tinyurl.com/jej6vxu 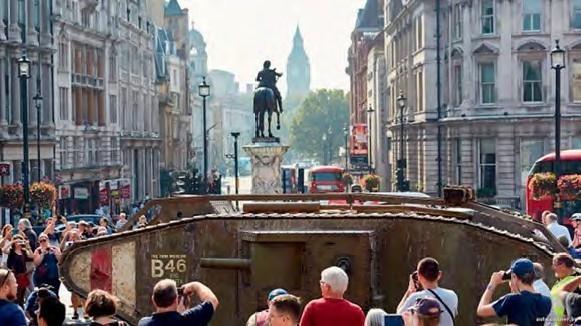 Trafalgar Square 2016. A replica on display forms part of the commemorative activities marking 100 years of the tank

Trafalgar Square 1918. Tanks were driven here to help raise capital for the war effort; warbonds were being sold 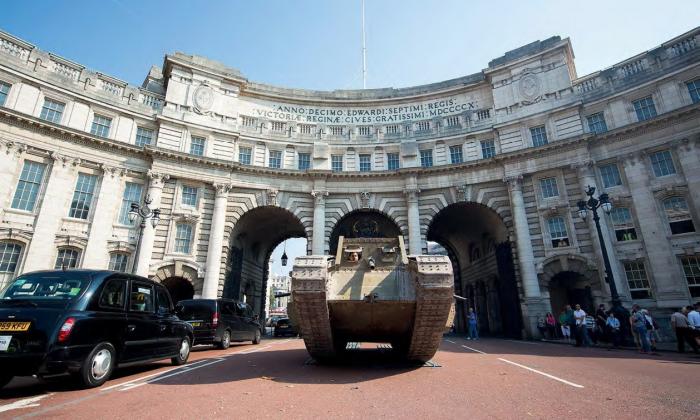 A replica Mark4 from the film Warhorse, driven through Admiralty Arch 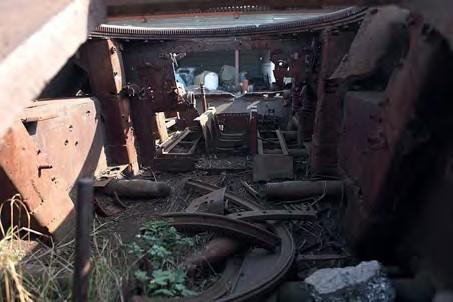 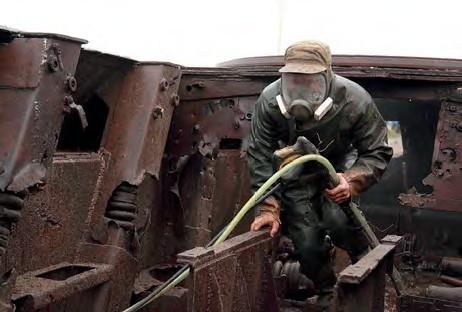 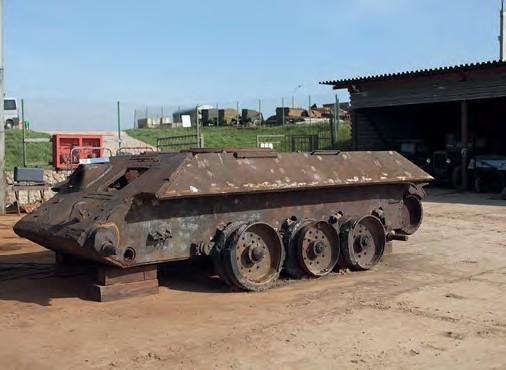 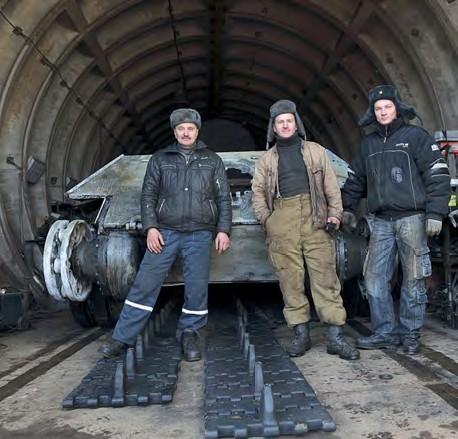 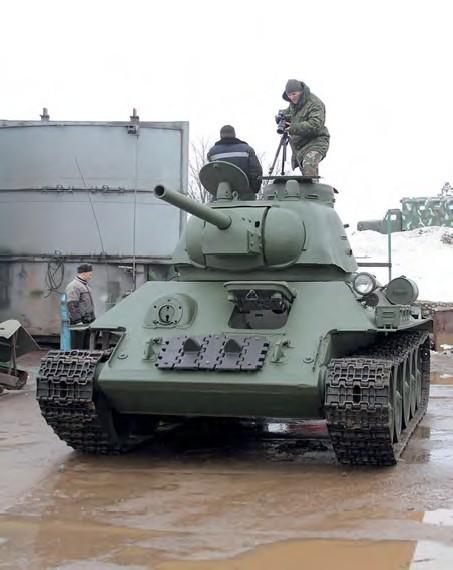 T-34, a painstaking labour of love restoration, conducted over six months by three professional Belarusian tank-restorers. Every part used was contemporary to this 1943 T-34 tank, although not necessarily originally from it

In November 2015, fragments of a 1940 KV-1 were discovered and extracted from a bog in the Vitebsk region, Belarus. Salvage experts found a near-complete turret equipped with a rare L-11 gun, and fragments of the running gear, as well as a part of the hull’s underside. The tank had been undiscovered and left to rust for more than 60 years but Wargaming.net joined forces with The Historical and Cultural Complex, from Stalin Line Museum, to bring the KV-1 back to being fully functional. It has now become part of the museum’s vehicle collection and participates in films and historical reenactments. https://tinyurl.com/jvy3b5h

An award-winning documentary, funded by Wargaming.net and directed by one of their employees, Slava Makshun, charts the progress of three professional tank restorers from Belarus as they tackle the restoration of one of the few remaining T-34-76s, from a rusting empty hull retrieved from a bog, to full running order. To retain the vehicle’s authenticity, nearly all the parts used were either original or contemporary 1943 parts.

The film focuses on the men, their passion and their skill rather than the technical aspects of the project. https://tinyurl.com/z3slopw

Later, another film was made: Tanks Smell of the Bog, https://tinyurl.com/hlxcohs following these same three men as they travel around Belarus seeking the parts for further restoration projects, hunting them out in old battlefields or where locals told them vehicles had deliberately been sunk to prevent them getting into the hands of the enemy.

A 1941 tank battle featuring T-34 and Panzer III tanks, artillery, warplanes and dozens of infantrymen was recreated in the grounds of the Stalin Line Museum in Minsk and the 360 degree, virtual reality film shot of the event by Wargaming’s VR experts, teleports the viewer into the heart of the battle.

Early 2016 saw a team of 360-degree filmakers from Wargaming.net meet historian Dan Snow aboard HMS Cavalier to create a virtual tour of the ship. This is just one in a series of films being created which explore tanks, ships and planes located in areas difficult for most historians or enthusiasts to get to. Dan said of the initiative: “VR is a paradigm shift. Now anyone, anywhere in the world, is going to be able to access this ship, walk around it, and actually experience it almost as if they were here.”

Last year, marking the centenary of the first ever deployment of tanks, at the battle of the Somme, the Tank Museum at Bovington ran a special programme. Along with historical app developer Ballista Digital, Wargaming created the Tank100 app.

The Mark 1 tank was placed ‘virtually’, using geo-fencing technology, in 100 locations across the UK, and if you were at any of those locations, with your phone and the app, you could see a 3D augmented-reality image of the tank. 360-degree videos were also produced. A working replica of the Mark 4, used in the film Warhorse, was driven from Trafalgar Square, where tanks were positioned during the war to drum up support for the purchase of warbonds, through Admiralty Arch on its way to Buckingham Palace to launch the series of commemorative events.

All of the 360-degree videos mentioned are free to watch and can be streamed, if you have a device with the YouTube app or with the Littlstar app via the link http://vr.worldoftanks.eu. To find the restoration documentaries simply type the links above into your browser, the Tank100 app can be downloaded from iTunes and Google Play Market.

A fascinating new exhibit will be unveiled at the upcoming Tiger Tank exhibition launching this month.

Richard Cutland, former tank commander and now head of European military relations for Wagaming said: “Using the latest digital technology, visitors will be able to see a fullsized Sturmtiger in the exhibition with the use of our augmented reality app. 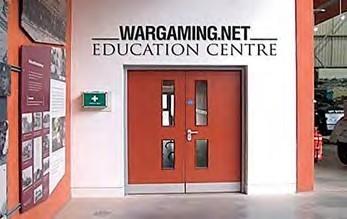 World of Tanks sponsors the Education Centre at Bovington Tank Museum, as well as the annual Tankfest Event