Self Propelled Guns of the Soviet Union 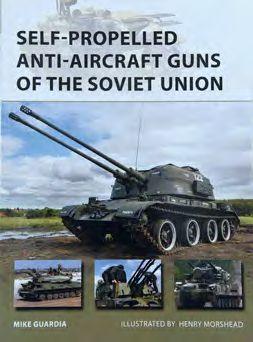 During the Cold War, within its mechanised forces, the Soviet Armies accomplished something that its American counterparts never could - the fielding of a self-propelled anti-aircraft gun (SPAAG) that could keep pace with its heavy armoured formations. This, specialist but slim, book examines the design, development and operational history of the Soviet Union’s Cold War SPAAGs namely the ZSU-37, ZSU-57-2, ZSU- 23-4, and the 9K22 Tunguska.

Reportedly, these full-track vehicles excelled in the air defence role, and many US Department of Defence (DOD) publications were devoted to examining how to defeat the ZSU and its radar tracking system.

These formidable weapons were used by Russian forces in Afghanistan and were subsequently encountered by coalition forces in Iraq during Operation Desert Storm and Iraqi Freedom because of the supply of USSR weapons to Saddam Hussein.

This book written by Mike Guardia, an Armour Officer in the United States Army, details the history of the Russian SPAAGs with photographs in colour and monochrome, numerous technical illustrations as well as a few more fanciful ones and detailed specifications and references.

Verdict: This book covers a particularly specialised subject which makes it either invaluable or irrelevant depending on your interests.