ONE OF THE MOST NUMEROUS TANKS OF THE SECOND WORLD WAR WAS THE ICONIC AND RUGGED SHERMAN. IT IS ALSO ONE OF THE MOST EASILY RECOGNISABLE MILITARY VEHICLES OF THE CONFLICT. MARK KHAN CHARTS ITS USE BY BRITISH AND COMMONWEALTH ARMIES.

A tank of the 17th/21st Lancers pictured at San Angelo in Italy, April 1944. The tank’s commander - Sergeant A.G. Williams is striking a relaxed pose for the camera. 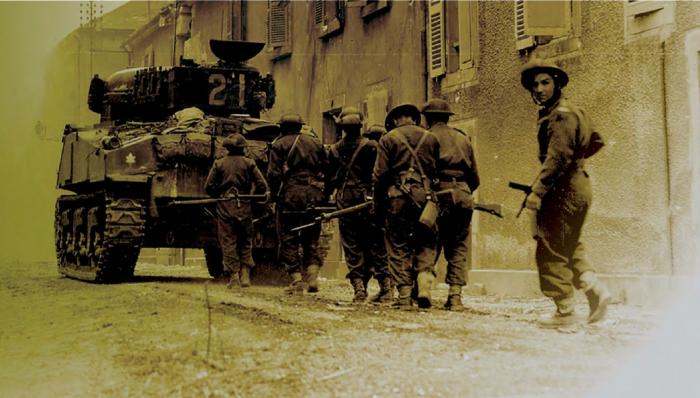 A Canadian Sherman of the Sherbrooke Fusiliers advances with the support of men of the Les Fusiliers Mont Royal, as part of 6th Infantry Brigade, 2nd Canadian Division, Falaise, 17 August 1944. (NATIONAL ARCHIVES CANADA)

The Medium Tank M4 was arguably the most important tank to have served with the Allied forces during the Second World War. Without it, in the numbers that were available thanks to the huge industrial manufacturing capacity of the United States, it would not have been possible to prosecute a successful war against the Axis powers. More than 40,000 of these tanks were built, with many variants introduced, as well as the basic chassis being modified for many specialist roles. The M4 served in large numbers not only with the US Army but also in armoured units of the Allies. Approximately 17,000 M4s, 34% of all M4s produced, and 78% of all M4s provided under Lend-Lease, served within British and Empire armoured units.