During the cold war, the British Army regularly held exercises transporting tanks on Europe’s railway network. But with recent conflicts being centred on the Middle East in Iraq and Afganistan, those exercises were mothballed and requisite skills lost.

Since it was built, the forces have used the Channel tunnel to transport kit and supplies, but until this year, never tanks. Recent cuts in defence spending means that the army no longer retains rail transport experts, so civilian logistic specialists were called in to load a Warrior at the army’s rail head in Wiltshire and then later, in Folkestone, a Challenger tank. These were sent through the tunnel to France and then back again, in the small hours of Thursday, January 19.

British Army bases in Germany are set to close, so in future, deployment of armoured vehicles will have to be direct from the UK. This, coupled with the perception of an increased threat posed by Russia, means that the MOD is seeking new ways to dispatch heavy weaponry to eastern Europe in support of NATO’s rapid reaction force, should it be necessary; around 800 British soldiers are expected to be deployed in Estonia later this year.

The operation was kept low profile, with no media being invited and only a cursory tweet, with picture, being circulated. The MOD, declined requests for further images, but stated the operation had been designed to test ‘the viability of using the Channel tunnel, to move vehicles and equipment to mainland Europe, adding to the existing range of options available, and increasing the agility of our armed forces’.

Russia described the move as a ‘stunt’. 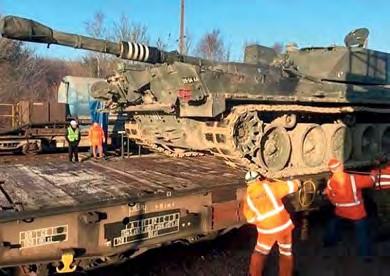