EDF have had their plans approved to construct the 450MW ‘Eoliennes Offshore du Calvados’ project off the coast at Courseulles-sur-Mer. This wind farm of 75 turbines standing 180ft tall, and only 10km off the beaches of Utah, Gold, Juno and Sword, will fundamentally change the views from those beaches. This has caused consternation among those who make the pilgrimage to the D-Day beaches to remember and commemorate those who fought in the largest single-day amphibious assault in history in 1944. Thousands of people from Britain, France, Canada and beyond have signed a petition against the project organised by a group called European Platform Against Windfarms. Jean-Louis Butré, chairman of the organisation said: “This would desecrate what is a marine cemetery for thousands of soldiers who came from around the world to liberate France and Europe from a tyrant”. 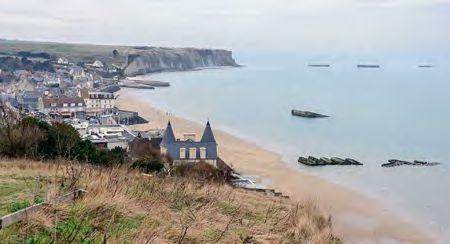 Protests have recently been organised by various environmental campaign groups wanting to preserve the both the environment and the heritage of the Normandy coast. The approval of the farm’s construction is now subject to an appeal submitted by regional and national associations, to the Court of Nantes. They argue that the beaches have become memorials and that work is still underway to try and get them recognised under UNESCO’s World Patrimony to safeguard them against industrial development.